Unfortunately only 16 members attended this event.

The Dominoes was won by Brian Hurt.

This led to a strong fightback with Ian and Fred gaining 13 points over the next 8 ends to go to All But at 20 to 18. They actually were in a winning position with only one bowl left to be played at the next end, but Ron Owen’s last bowl ran the jack through to give Peter and Ron three points and victory.

Congratulations to the following for winning the best player trophies for their respective divisions.

The Veterans trophy is still undecided with four matches remaining. The leading contenders are Steve Denny with 16 wins out of 26 and Joe Cross with 14 wins out of 20.

The Club is grateful to Ron Owen for making a trophy available (the Anita Owen Trophy) for the Welcome League.

All trophies will be presented on Club Presentation Night.

We are now nearing the end of the current bowls season with only four veterans matches still to be played. This year we had a seven teams in play including an extra team in the Welcome League making 139 league matches played in total.

The annual meeting of the Bowls section took place on Monday 15th September, with 24 members going to dinner at the Toby Carvery afterwards.

In the FABA league our A team finished fourth in division 3 while the B team ended up being relegated from division 5 to division 6 by only one point.

In the Lytham St Annes league  our two teams were both in division 2 with the A team winning the division by 39 points, losing only one game in the whole season. The B team finished in fourth place,  only five points away from Second place. We have indicated to the league that we will be unable to raise a team on a Friday night and do not wish promotion to division one next year.

In Division 1 of the Lytham Veterans league we still have four games to play and although three of the remaining games are against the top three teams in the league we are 25 points away from the relegation zone so should be safe.

In the Welcome league the A team has been relegated from division 2 to division 3 by only one point. The narrowness of this fate is shown by the fact that we gained 75 points with the teams above us having 76,  77, 77 and 79 points respectively.

Many members will have seen the progress being made on the roof remedial work.

There has been a major new problem established in that the North chimney which was not intended for any attention, proved to be supported on little more than hope and some frail timber with the underlying bricks having deteriorated completely.

As a result it has been necessary to have this chimney taken down urgently before any serious accident occurred.

This picture shows the present state of the work 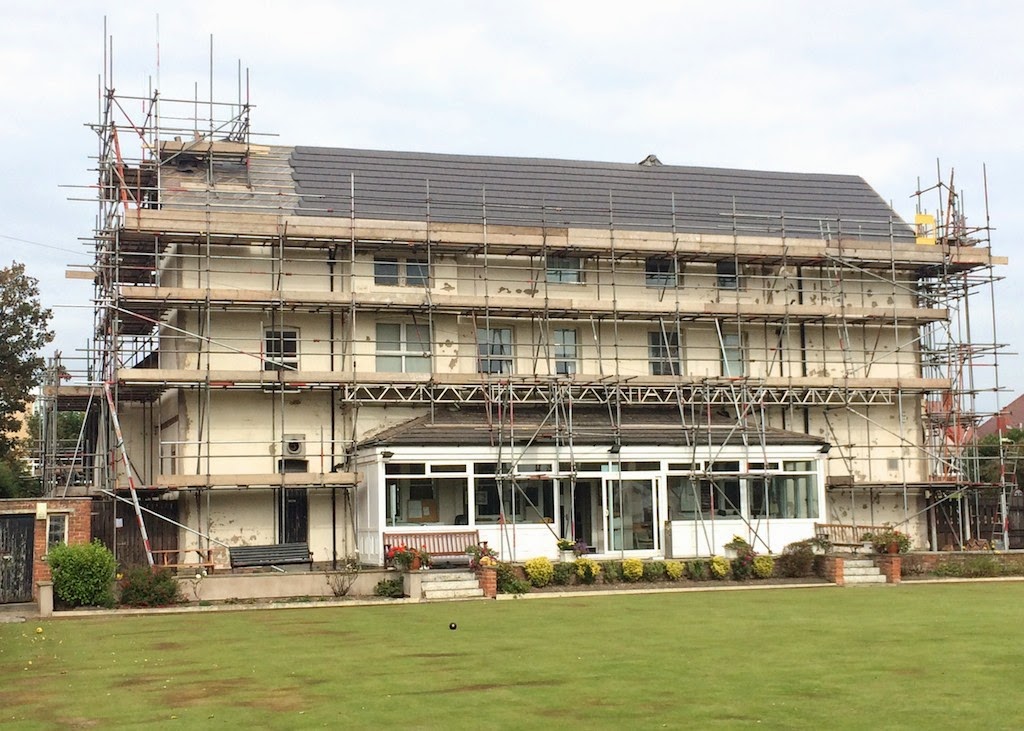 It was considered necessary to postpone the 3 club, Marston
Trophy competition as we began to run short of player numbers.
Rather than try to reorganise it at short notice, the Bowls annual
meeting felt we should try to arrange the match for next march as a  preliminary to the new season.